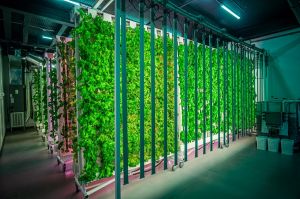 Listen as Ben Feagin, CEO of Agri-Tech, talks to Mark Kirby about supply chains in rural Canada, and how innovations including 3d printing can potentially help transform food insecurity

Being so far north, Dryden must have a fairly harsh climate, and I've heard some people describe it almost as a food desert, would that be fair?

“…even though the supply chain passes right through the city, you would never know it. Any of the grocery stores here, even though we're a local producer, have to sell through Winnipeg or Thunder Bay just for it to travel back and land in our grocery stores. And that's very indicative of the lack of supply chain infrastructure in our rural and remote communities and how even though we're on the highway, the infrastructure doesn't exist.”

“When you go to the grocery stores here they have very few options in comparison to our urban centers, so you become very aware that there it is definitely a food desert and there is a food insecurity issue here, but people who have lived here their whole lives don't see it as a food insecurity issue because they grew up with it. It's been the problem for so long that it's accepted as the norm.”

“The common thing here is for people to buy fresh produce and for it to go bad in the fridge overnight.”

“Food is a low margin industry, and we have a limited startup capital to work with. Agriculture in general is capital intensive. Traditionally that it would be sunk in products like tractors (but) in vertical farming while we don't need tractors one of the bigger line items, for example is lighting, pumps, electronics - the automation to reduce labor intensity.”

Can you explain a little bit your vision for 3D printing?

“Post COVID here essentially every piece of equipment that was an electronic or mechanical component was defective when it arrived (due to poor QA from stretched suppliers operating between Covid shutdowns). And that has put us six months behind.”

“When we order a part, if somebody tries to overnight it to us, it still doesn't get to us until a week later. You not only have that highway delay, but now you have the trip to a far North airport that's roadway accessible, and then the trip on the plane itself, which doesn't necessarily run routinely. A small part will sit waiting for a larger shipment to be going to be able to bring it. So you end up with weeks or even months delay.”

“3D printing offers the ability to print spare parts and this has impacts not only in vertical farming, but in general maintenance across industries. We want to get to the point where the large majority, if not all the means of production, could be potentially 3D printed.”

“We've started with freestanding inventions that are not connected to other things that are 3D printable that solve a labor intensive problem.”

Thoughts on the skills that will be needed to support 3D printing? Do you see that as being an easy transition for the remote communities?

“Our education system already incorporates 3D printing and our local high school already has a 3D printer, so it's already being integrated into our curriculum.”

“We are also getting involved in education curriculum development through a program called Grassroots Growth initiative that we've been funded to put a year round agriculture education system into our local schools.”

Do you see 3D printing possibly being a revenue source for remote communities?

“The potential exists, and not only for vertical farming, but also for the community at large for spare parts. There is a lot of equipment that sent to the far north and even if the simplest thing breaks on it then it's left on the land to just rust out.”

“So you think of snow machines, 4 Wheelers, tractors, anything - and sometimes the time that passes waiting for a part, something else breaks or it rusts out. That's where I think that there is advantage, a need.”

What are you most proud of after a year back in Dryden?

“I think there is a general cultural perspective that things never change in some of our small communities, and Innovation doesn't happen in the north.”

“Our biggest success is crumbling that perspective, and giving people hope.”

“They've lived with these kinds of problems for generations, and to show that change is possible makes everything worth it. I think that that's the thing that we as an organization are most proud of.”